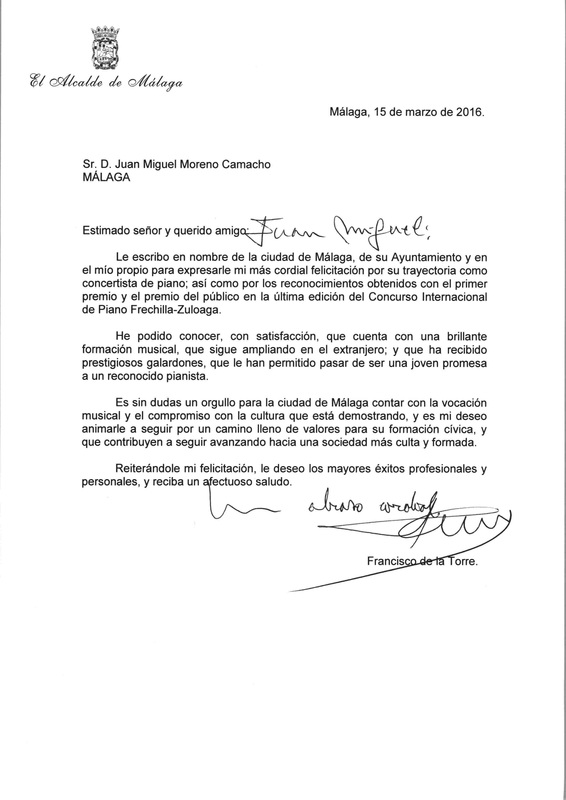 (Letter by his excellency the Major of the city of Malaga, Don Francisco de la Torre Prados)

Born in Malaga, Spain 1989, Juan Miguel Moreno Camacho started his piano studies at the age of seven with Gordana Komericki. He continued his studies with Ángel Sanzo at the Badajoz Conservatoire where he obtained his Bachelor with a Degree Award. Afterwards, Juan Miguel had regular lessons in Alcala de Henares with Josep Colom (2010-11), and in Valencia with Luca Chiantore (2011-12). From 2012, Juan Miguel studies in The Hague (The Netherlands) with prof. David Kuyken. He finish Master in 2015 with a mark of 9.5. He had masterclasses with Joaquin Soriano, Oxana Yablonskaya, Jacques Rouvier, France Clidat, Imre Rohmann, Andrzej Jasinsky, Claudio Martínez Menher, among others.

Since 2013, Juan Miguel studies Composition with prof. Martijn Padding and Cornelis Dvont. In 2017, he finished Bachelor with a mark of 9. Some of his pieces were premiered in halls such as Tivoli Vredenburg (Utrecht), Orgelpark (Amsterdam) and Koninklijk Conservatorium.

Already at the age of 12 Juan Miguel Moreno Camacho made his debut with a recital at the Maria Cristina Hall in Málaga.

His Spanish Music Performances have also obtained an award at the competitions: "Frechilla-Zuloaga", “Ciutat de Carlet” and “Ciudad de El Ejido”. In this last competition his Baroque Music performance was also awarded.

He also won Second Award at the following competitions: